World War I (1914-18) was the first conflict that caused military mobilization on a global scale. It was referred to by contemporaries as the Great War because it was quite literally greater than any other conflict that preceded it. Although the majority of the fighting occurred in Europe, many of the actors were colonial powers and those colonies were drawn into the conflict. The U.S. did not officially enter the war until 1917, but the outbreak of the war, in 1914, deeply affected U.S. domestic and foreign relations. In April of 1917, after Germany escalated to unrestricted submarine warfare and downed several U.S. merchant ships, President Woodrow Wilson famously called on Americans to join the fight in order to make the “world safe for democracy.” The American Expeditionary Forces (AEF) were deployed to the Western Front. Germany surrendered in the fall of 1918 and peace terms were negotiated at the Paris Peace Conference and ratified in the Treaty of Versailles.

The collections below highlight some of the experiences of American soldiers prior to, during, and after the Great War. Photographs, photo-albums, postcards and correspondence are evidence of their time in military service and a record of events as seen through the eyes of direct participants. In the years leading up to the Great War technological advances in photography made it possible for soldiers to carry portable cameras while deployed. The Donald Hiram Stilwell Photograph Collection, 1908-1918 is an example of the types of photographs soldiers may have collected and taken during deployments abroad and during military engagement. The American Expeditionary Forces Photograph Album, 1918 is an example of the type of military surveying made possible with a small format camera. Correspondence collections provide readers a glimpse into the thoughts, ideas and day to day lives of the writers. The Alton L. Flanders World War I Correspondence Collection, 1918-1919 shares the lived experience of a soldier in wartime as he communicated with loved ones at home. As American historian Jay Winter writes, "what photographs, or plays, or poems, or letters provide are traces of a world that has almost vanished from both memory and history."[1] These collections serve as a point of remembrance for the all but vanished world in which the Great War was fought.

Donald Hiram Stilwell served in the Navy from 1908-1912 as an enlisted man and was posted in Asia for most of his enlistment. From 1912-1917, he worked in a naval shipyard in Maryland. In 1917 he rejoined the Navy, serving in the Atlantic area near France. He was discharged in 1918. The collection consists of photographs and postcards acquired by Donald H. Stilwell during his naval service in the Philippines, Japan and China from 1908-1912 and during World War I in France and aboard the Destroyer U.S.S. Sigourney in the Atlantic.

World War I photo album taken with the American Expeditionary Forces in Europe, including six aerial views. The album includes images depicting citizens with their goats, monkeys, and donkey carts; soldiers and pilots; a set of photographs taken "1918 Thanksgiving Day"; panoramic shots of cities and bridges; and a three photo montage of a blimp being filled.

Alton L. Flanders served in the 2nd Battalion, 5th Marines infantry battalion during World War I. The collection consists of four letters he sent to his cousin Mrs. Jason Coppernoll in Johnstown, NY, in which he documents his experiences at Camp Devens in Ayer, Massachusetts in 1918, and while stationed in France with the American Expeditionary Forces (A.E.F.) in 1918 and 1919. 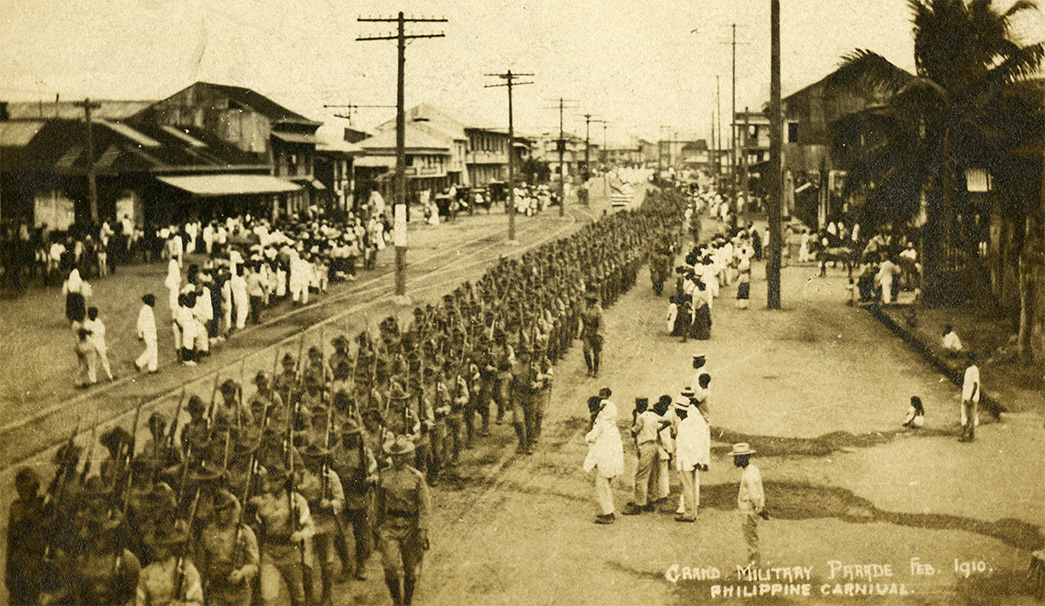 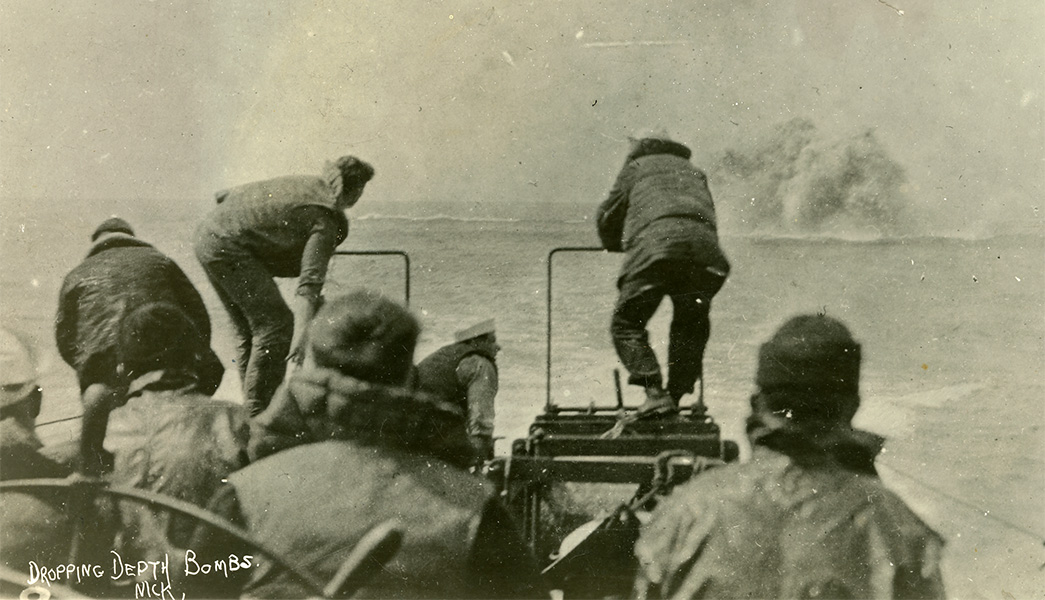 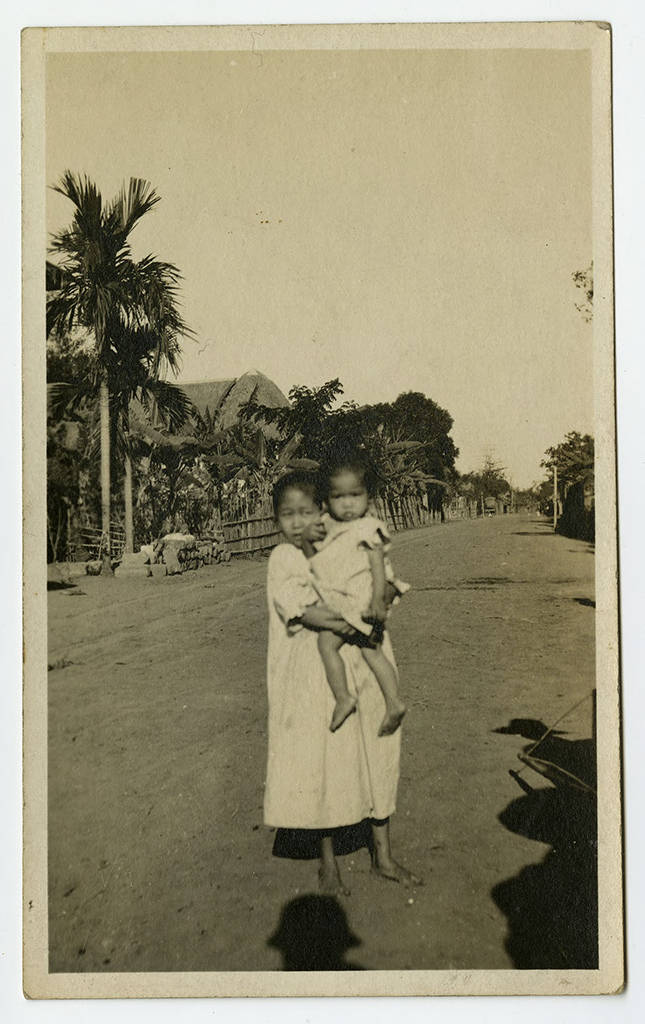 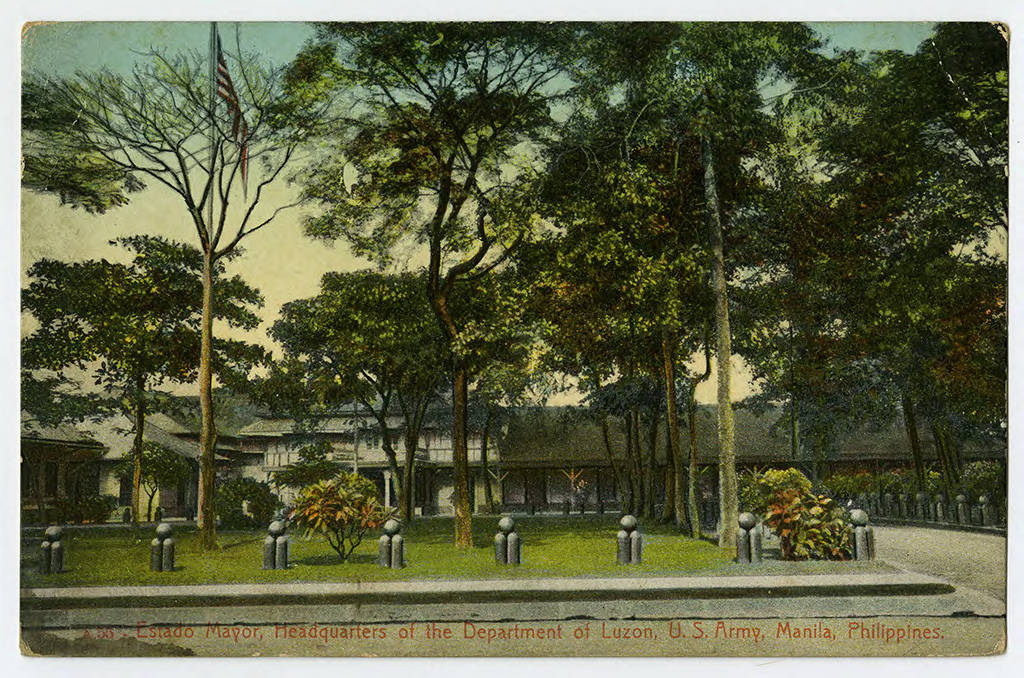 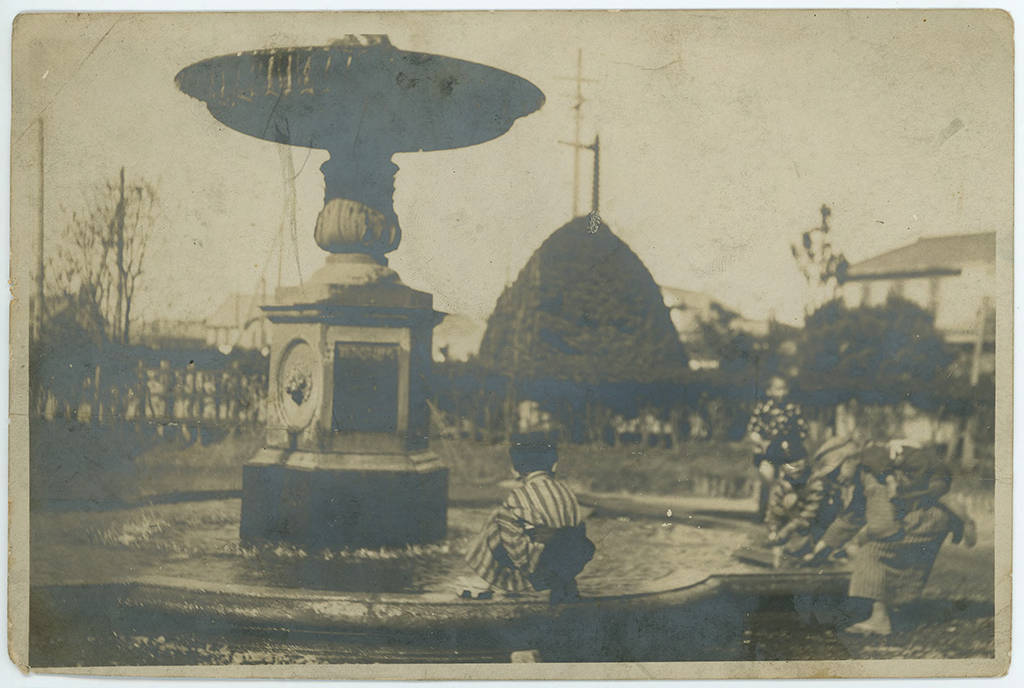 Children playing in a fountain, ca. 1910 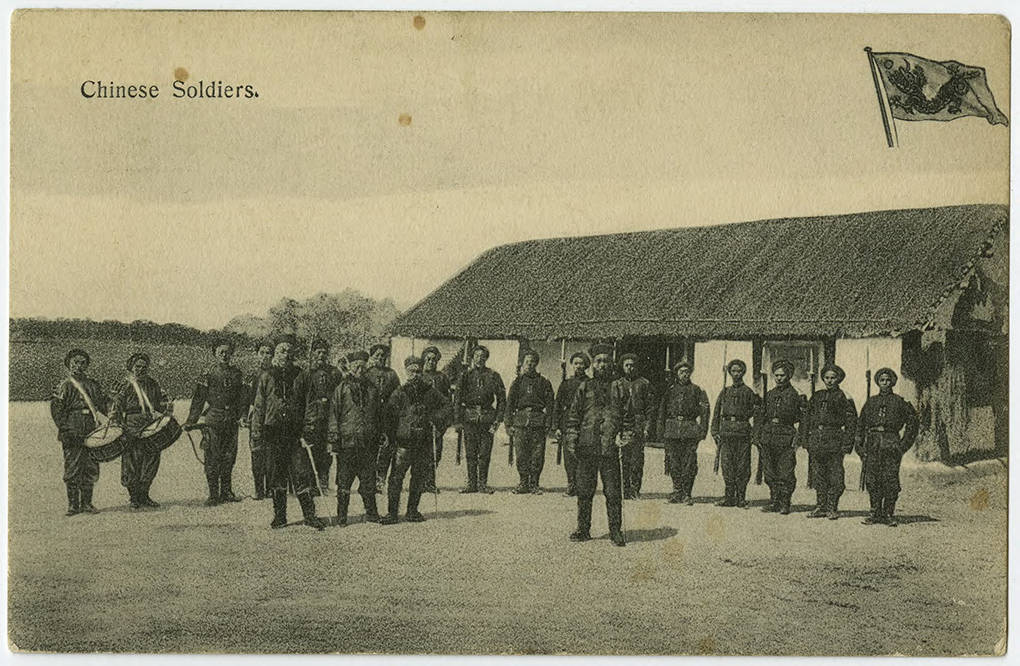 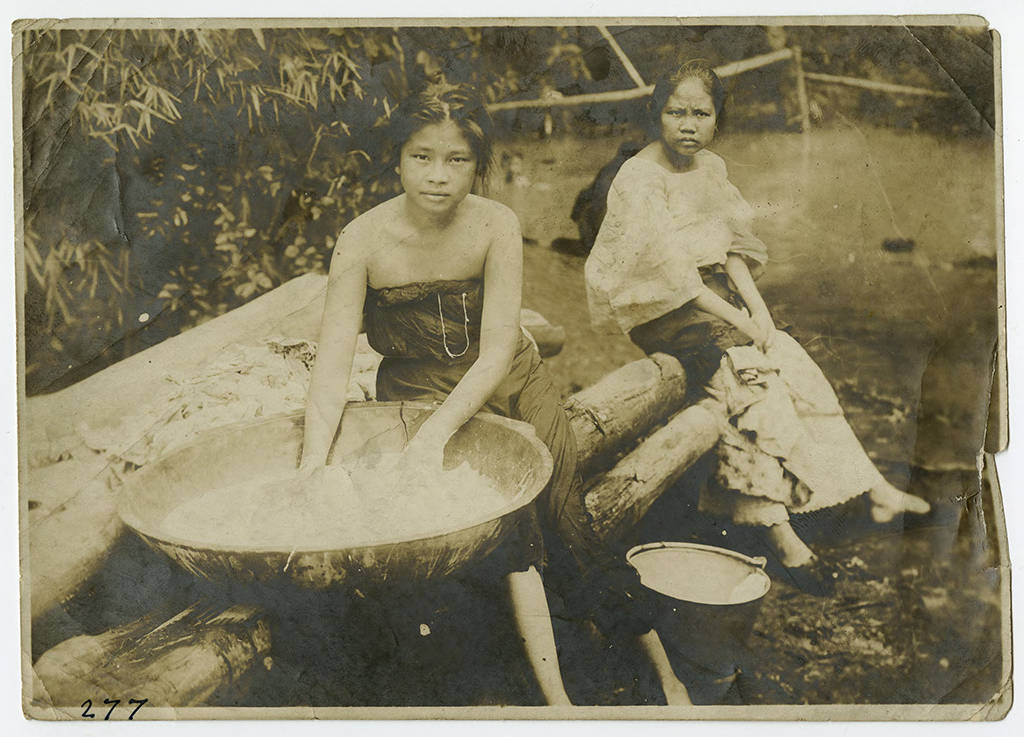 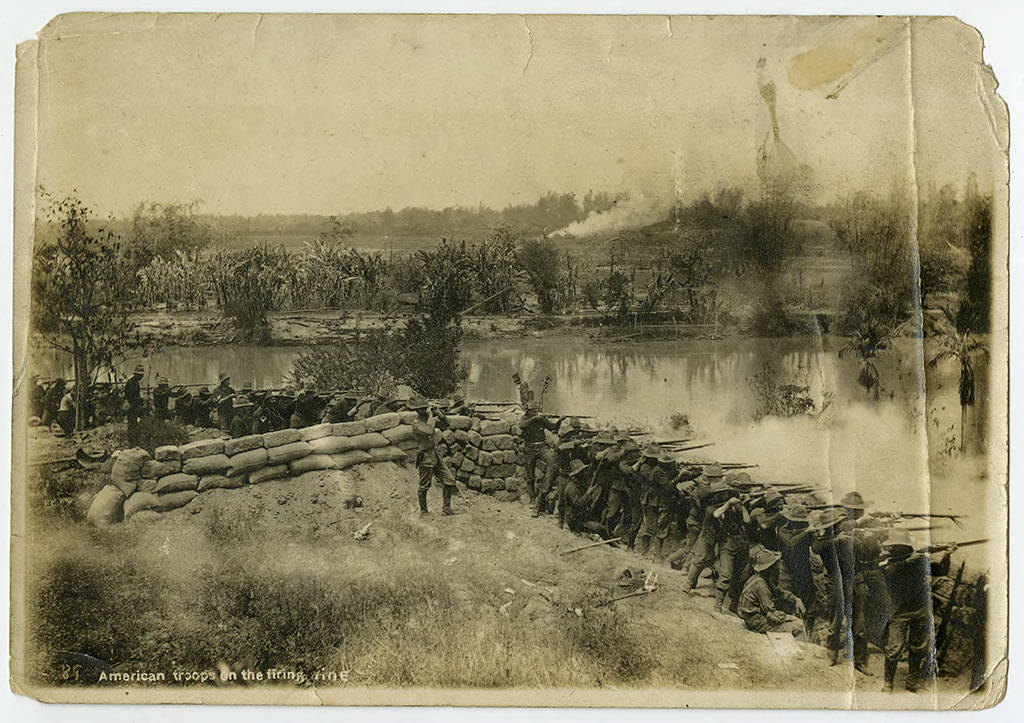