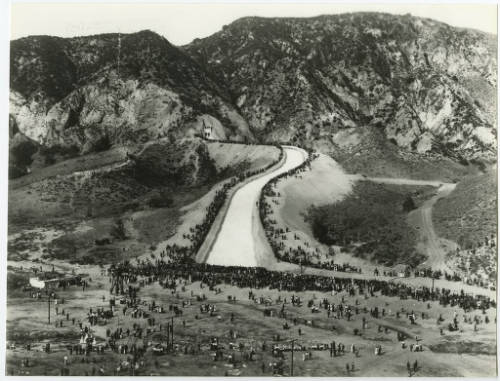 The monumental completion of the Los Angeles Aqueduct in 1913 secured the City of Los Angeles as an oasis for opportunity. Over decades, growing populations demanded more water development to support the ever-expanding metropolis. However, water in this arid region came with great costs, determination, contestation and labor, which sharply contrasted with the vision of prosperity it provided. Selected from six archival collections, this database offers unique and diverse perspectives into the history of the municipal water system in Los Angeles during the 20th century.

The Catherine Mulholland Collection contains the office files of William Mulholland, superintendent of the Los Angeles Water Department and chief engineer of the Los Angeles Aqueduct that began bringing water from the Owens Valley in 1913. This collection offers researchers insight into the unique history of urban development and the evolution of the municipal water system in Los Angeles. Records in the collection chronicle the roles played by politicians and local politics; private business and industry; civic organizations; and local, state, and federal governmental agencies invested in providing water to the city’s rapidly growing population.

Andrae B. Nordskog was a political reformist for issues relating to public utilities, most importantly, California water development. In 1927, he became involved in the Los Angeles-Owens Valley water controversy and published articles and editorials which championed the Owens Valley’s cause. He was a staunch critic of the Los Angeles Department of Water and Power, and local businessmen for using Owens Valley water to cheat Californians out of millions of dollars. The Andrae B. Nordskog Collection contains his research that has significantly influenced the way historians have viewed the Owens Valley controversy. In 1930, Nordskog was elected President of the Los Angeles-based Southwest Water League, an organization dedicated to the study of water needs and resources of the southwest. For related subjects, see Nordskog’s underground publication The Gridiron.

In 1939, Southern California had secured additional water from the Colorado River Aqueduct. With two major aqueducts supplying water to the region, The City of Los Angeles and surrounding areas had a growing need for containment and runoff systems within urban and suburban areas. Between 1943 and 1976, Homer Halverson, civil engineer for the United States Army Corps of Engineers, photographed water infrastructure construction sites to monitor new and existing projects. These photographs (many of which are annotated) capture the intricate networks of engineered channels and water management systems throughout Los Angeles and surrounding counties.

By 1924, the Los Angeles Aqueduct was viewed as insufficient to fulfill Southern California's growing water needs. From the 1920s to 1940s California's Water Plan was mired in debate between Northern Californian water-rights owners and Southern California water users. When Governor Goodwin Knight created the California Department of Water Resources in the 1950s, residents from all over California incorporated the Feather River Project Association (FRPA) as a not-for-profit, non-partisan educational association to serve the public interest in state and local water development and conservation. This organization, headquartered in Los Angeles, worked to research and resolve ongoing water-related issues and educate Californians about them.

From 1926 to 1967, Samuel Nelson worked for the Los Angeles Department of Water and Power, eventually serving as general manager and chief engineer. The documents feature Nelson’s work during the construction of the second LA Aqueduct from 1965 to 1967. Featured in this collection are letters concerning the Snake-Colorado River Project, organizational histories of the Los Angeles DWP and the Metropolitan Water District of Southern California and speeches regarding projected water needs and proposed solutions through the year 2000.

The Duane L. Georgeson Papers document his professional career from 1957 to 2011 with the Los Angeles Department of Water and Power and the Metropolitan Water District. During his 53 years as an engineer, Georgeson influenced important water policies and procedures in Southern California, contributing to the political and economic water climate currently in place today. Featured are early reports collected by Georgeson regarding the LA Aqueduct, Owens Valley and the St. Francis Dam disaster, as well as documents from the 1980s and 1990s addressing future water demands, runoff and the declining ecology of Mono Lake due to the diversion of its water.